and History of Kinesiology

History of Kinesiology: Part I

Kinesiology: The study of muscles and their movements, especially as applied to physical conditioning.

Applied Kinesiology (AK) is a practice of using manual muscle-strength testing for medical diagnosis and for the determination of prescribed therapy. It gives feedback on how the body is doing.

Kinesiology originated in 1964 through the work of Dr. George Goodheart, a Chiropractor who pioneered this specialty. He discovered that the strength or weakness of every muscle was connected to the health or lack of health of a specific corresponding organ. He also determined that the indicator muscles were associated with acupuncture meridians.

He found that "beneficial" physical stimuli, like vitamins supplements, would increase the strength of certain indicator muscles that he tested. In addition, he saw that "hostile" stimuli would cause those muscles to go weak. To him, this implied that at a deep level, the body is affected by what is perceived to be “good” for it and what is not.

Clinical Kinesiology came out of Applied Kinesiology. In 1968, Dr. Alan Beardall who had just graduated as a Chiropractor became one of Dr. Goodheart’s students. He went on to develop over 250 specific muscle tests to diagnose and evaluate structural, chemical, and mental aspects of health.

During a muscle test on a patient in 1983, Dr. Beardall discovered that particular hand positions (handmodes) could change the body’s response to the muscle test. This allowed this method of diagnosis to discover deeper, more underlying imbalances in the body’s energy patterns.

Today, many hundreds of "handmodes" have been discovered as “words” in a new body language.

Behavioral Kinesiology is also a refinement of Applied Kinesiology. In the late 1970's, Dr. John Diamond, who worked as a psychiatrist and also with preventative medicine, made another discovery. He found that indicator muscles would strengthen or weaken in the presence of positive or negative emotional and intellectual stimuli, not just physical stimuli!

He began to use this tool to diagnose and treat psychiatric patients. He called it Behavioral Kinesiology. He also found the link between specific emotions and acupuncture meridians. A partial list is found in the Acupuncture Meridians page.

There you have a short history of Kinesiology. Now lets look at the muscle test itself.

Kinesiological Test: This is also known as Muscle Response Testing (MRT) or just muscle testing. In the refined version of Dr. Diamond, this test is conducted with two people.

The subject stands erect, one arm relaxed at the side, the other arm held out parallel to the floor, elbow straight. The partner then places their hand just above the wrist of the extended arm and asks the subject to resist the downward force that he exerts. 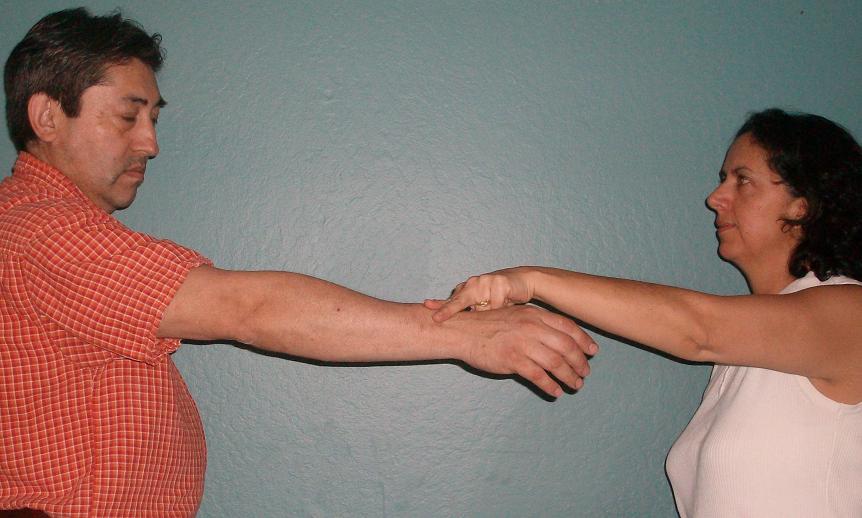 This process is then repeated while the subject holds or thinks about the item being tested. A weakened arm response is taken to be an indicator of energy blockages and/or weakness in one or more of the body’s energy meridians.

There are many variations of this test. Some chiropractors have the patient lay down to do the test and may use other arm positions. Some even use the feet instead of the arm to test.

Fingers are often used for self muscle testing. In Gary Craig's EFT Training DVD's, several methods are used. Gary Craig, the founder of EFT (Emotional Freedom Techniques), uses the turning ratio of his waist as an indicator.