Acupuncture meridians are called many names. These names includes Chinese meridians, energy meridians, and Chi meridians, just to name a few. These meridians carry the energy that vitalizes all manifested forms of life and allows them to flourish and grow. In modern language this energy is "information". Different cultures call it by names such as: Chi, subtle energy, Prana and vital energy to name just a few.

Energy, however, is not to be confused with divine/eternal Spirit. While it is a form of creative power and the building block for the world we see that is constantly changing in form, it is not eternal in nature.

Einstein said, "Energy cannot be created or destroyed, it can only be changed from one form to another." This energy is the foundation of the world, a world of finite, temporal objects that can be perceived as separate and appear to have a beginning and an end, but at the subatomic level, are all just energy in motion.

I would describe energy as a self-perpetuating loop with no real cause that can become unbalanced due to its relativity and dependence on duality or opposition in order to produce the flow (positive and negative, good and bad, high and low, etc.).

This flow of energy is invisible to the human eye. However, experienced Chinese doctors can feel and trace the pathways that this energy flows in with their hands.

About 5,000 years ago they mapped these energy channels like meridian lines. With this accomplishment, acupuncture was developed to help balance the energy or Chi that gets stuck in these acupuncture meridians.

Think of these acupuncture meridians as streams or rivers flowing with energy or information. Like a river that provides water to its surrounding areas, these channels distribute energy and carry information to the surrounding area of the body. The body can then carries out the instructions. 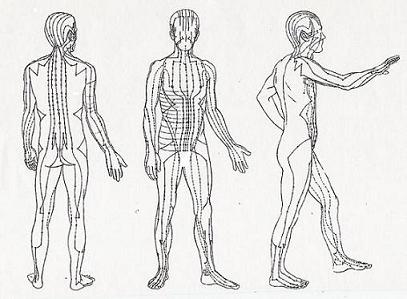 Sometimes, however, the flow of energy is disrupted. An overload of energy in the form of strong emotions and trauma can block or disrupt the flow of Chi. It is like a surge of electricity going to your TV and causing a circuit to blow. Optimal health depends on energy consistently flowing; balanced, free, uninterrupted and without conflict or resistance throughout the entire body.

You can also think of it in terms of an information download. If the data size is too large, and your computer capacity can't process it, the download is very slow or gets stuck.

This would mean that some areas of the body are cut off from the information needed to run properly and some are holding too much unnecessary information that clogs up the channels.

This is where Emotional Freedom Techniques (EFT) comes in. Practicing EFT will help clear the stuck energy from your acupuncture meridians. Allowing energy to once more flow freely to all parts of your body. Go to EFT Tapping to learn more about this amazing meridian tapping technique.

Acupuncture meridians can be found throughout the body. There are many acupuncture points along these meridians that serve as energy reservoirs where energy is collected over time. These meridian points can be stimulated with needles, physical pressure, or tapping to release or redistribute this energy.

There are 12 primary acupuncture meridians. These channels surface to the skin twelve separate times and appear to be segments. However, under the surface, these meridians interconnect with one another. Each one is named for the primary organ or system they distribute energy to. Two pathways, called the central and governing meridians, are considered meridians as well, even though they do not correspond to a particular major organ system.

Each Chinese meridian has a time period where its particular energy is strongest. They are also associated with specific emotions.

Listed below are the twelve primary energy meridians, their time periods and the main emotions linked with them: