The formal Alzheimers Stages are described below. It is a system for organizing characteristics and behaviors of an Alzheimer's patient to give us an idea of the progression of the disease.

This system was developed by Barry Reisberg, M.D., clinical director of the New York University School of Medicine's Silberstein Aging and Dementia Research Center. However, they are only guidelines and not everyone will experience the same symptoms, or have them at the same rate, and the Alzheimers stages may overlap.

At the end of this page there is a link that will take you to where I share the signs of Alzheimers stages that I noticed in my mother Maria. She was born in 1920 and was diagnosed in 2002 with Alzheimer's. As of 2012, my mother entered the "late stage" of Alzheimers, stage 7. She passed July 4, 2017 very peacefully, but unable to eat or drink due to her inability to swallow.

No impairment (normal function). The person does not experience any memory problems. A medical professional does not see any evidence of symptoms of dementia.

Very mild cognitive (memory) decline (may be a normal age-related change or earliest signs of Alzheimer's disease). The person may feel as if he or she is forgetting things, like familiar words or where everyday things are found. No symptoms of dementia is noticed during a medical examination or by friends, family or co-workers.

Mild cognitive decline (early-stage Alzheimer's can be diagnosed by a medical exam in some, but not all, individuals). Friends, family or co-workers begin to notice problems. During a detailed medical interview, doctors may be able to detect memory or concentration difficulty. Stage 3 difficulties include:

• Noticing that it is hard to come up with the right word or name.

• Trouble remembering names when introduced to new people when before it was not so hard.

• Noticing greater difficulty performing tasks in social or work settings. Forgetting what one has just read.

• Having more difficulty with planning or organizing. 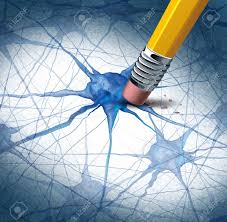 • Forgetfulness of what happened recently.

• Blocked ability to do challenging mental math, like counting backward from 100 by 7s for those who could do it before.

• Becoming moody or withdrawn, especially in social or mental situations where they don’t know what to do or say.

• Not be able to remember their own address or telephone number or the high school or college from which they graduated.

• Now become confused about where they are or what day it is.

• Now have trouble with less complicated math; like counting backward from 40 by subtracting 4s or from 20 by 2s.

• Now need help choosing appropriate clothing for the season or the occasion.

• Still remember important details about themselves and their family.

• Be eating or using the toilet without help.

Severe cognitive decline (Moderately severe or mid-stage Alzheimer's disease). Memory continues to worsen, personality may change and individuals need much help with daily activities. At this stage, individuals may:

• Lose awareness of something that just happened as well as of their surroundings.

• Remember their own name but have trouble with their personal history.

• Tell the difference between familiar and unfamiliar faces but have trouble remembering the name of a spouse or caregiver.

• Need help dressing properly. Without help they may make mistakes such as putting pajamas over daytime clothes or shoes on the wrong feet.

• Experience big changes in sleep patterns — sleeping during the day and becoming restless at night.

• Need help with the details of toileting (flushing the toilet, wiping or disposing of tissue properly)

• Frequently have more trouble controlling their bladder or bowels.

• Experience big personality/behavior changes, including being suspicious and having delusions (like believing that their caregiver is an impostor) or compulsive, repetitive behavior like hand-wringing or tissue shredding.

• Tend to wander or become lost.

Very severe cognitive decline (Severe or late-stage Alzheimer's disease). In the final stage, individuals lose the ability to respond to their environment, to carry on a conversation and, eventually, to control movement. They may still say words or phrases. They need help with most of their daily personal care, including eating or using the toilet. They may also lose the ability to smile, to sit without support and to hold their heads up. Reflexes become abnormal. Muscles grow stiff. Swallowing becomes difficult. 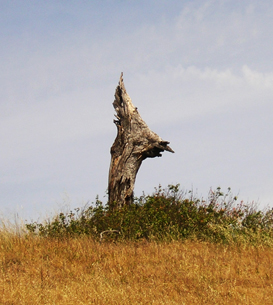 The 2019 Alzheimer's Disease: Continuum of Care XIII Annual Conference featured "A Day with Teepa Snow".  Teepa Snow from, Positive Approach to Care is an incredible resource and trainer for "care partner's'", as she calls the Alzheimer's patient caregiver.

I found Teepa to display a profound understanding and compassion for both the Alzheimer's patient and care partner.

Teepa showed us the connections between what is happening in the brain of the patient, and how it shows up as cognitive decline and in the patient's behavior. She demonstrated how to work in partner with the cognitive changes in behavior we see, rather than in judgement and opposition.

Unfortunately as of today, the causes of Alzheimer's responsible for the deterioration of the brain, memory and changes in behavior, are still unknown. Nevertheless, there are many clues to what may be under the changes we see in the Alzheimers stages.

For example, what I learned from the demonstrations of Teepa Snow is that there is an underlying narrowing of perspective in the Alzheimer's patient. The results of the illness is a closing-off of the external world and a separation from others. There is much fear there. As perspective narrows, their personal world shrinks, perhaps a desperate attempt to manage the fear.  Also, I would guess that if their sense of "self" is derived or tied to the external world, then they slowly loose their sense of self. It is a gradual forgetting of a scary world and self.

I invite you to look for clues in the similarities found in the life stories of those with Alzheimer's. You can read these stories and leave comments.

And if you feel inspired to share your personal experiences and observations of someone you worked with or cared for that has/had Alzheimer's, your contributions are greatly appreciated!

What Were Some Early Signs of Alzheimers You Noticed?

Sometimes we only notice things in hindsight. If you are, or were, a caregiver of someone with Alzheimer's, please share with us the early signs you can recall in the form below and some of the signs in the later stages. This does not need to be professional or take you a long time. Just type what you can recall now.

Looking back I see that there were early signs of Alzheimer's that I missed. I share these in the link at the bottom of the form, titled "What is 'normal' in old Age?". Please read the story if you are interested and rate what you read.

If you are someone with Alzheimer's I invite you to share your experience with us. Help us to be better informed and tell us how we can offer greater compassion and support.

What Other Visitors Have Shared

Click below to see contributions from visitors to this page.

What is "Normal" in Old Age? Not rated yet
Of all the Alzheimers stages, the first is the hardest to recognize. People forget things sometimes. It's "normal". My mother, Maria, would forget things. …

Go to Causes of Alzheimers

Go to Dementia vs Alzheimers